Have You Learned From the Auto Industry’s Woes?

By this point, we are all familiar with the automotive industry's struggles – semiconductor shortages are hindering vehicle output while consumers are simultaneously voicing their desire for automobiles and doubting they will find the car they want amid the shortages.

No matter what industry you’re in, if you haven’t already, you should be asking yourself, "How can I avoid having something like this happen to my business?"

Because, as you can see from the chart below, the impact is real. North America Light Vehicle Production came in at 12.8 million units during the 12 months through January. This puts Production virtually on par with the 2020 level – which includes the shutdown months of April and May. 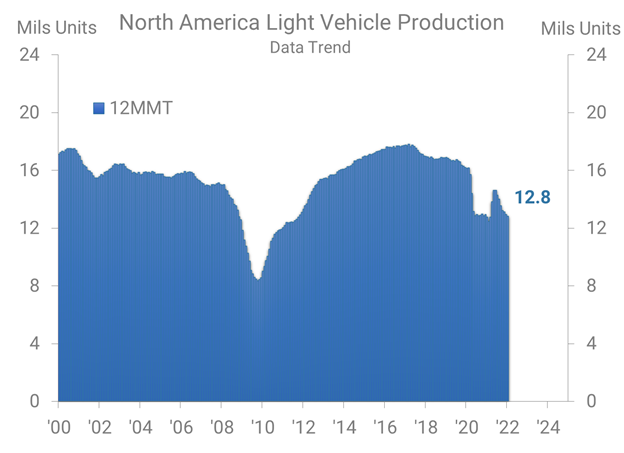 Before going further, we want to note that learning is not blaming. We are taking advantage of the clarity afforded by hindsight and detachment in order to consider ways in which businesses may avoid woes similar to those of the auto industry.

Since Management Objectives™ are a key component of the services we provide at ITR Economics, here are a few we would offer automakers if we had the ability to travel back to early 2020:

Consider not just your own markets, but also your suppliers' markets

Amid the 2020 shutdowns, the auto industry canceled orders for various parts and components . Critical to these inputs are semiconductor chips, which contribute to everything from the "flap actuators" which enable dual-zone climate control to the computers that govern automatic transmissions.

If you cancelled your orders virtually overnight, would your suppliers accommodate you upon your return?

When automakers were ready to restart production – much sooner than anticipated, thanks to demand, cheap financing, and other factors – the chip industry had turned more decisively toward consumer electronics. As the world moved to forge remote connections, demand for such items only increased, even as the auto industry and other economic segments underwent near-total shutdowns.

Can you get in front of this potential problem?

Semiconductors are a somewhat special case as there are relatively few manufacturers worldwide. This suggests a potential problem area for those that rely on this input.

Automakers have responded to shortages they now face by initiating strategic partnerships with semiconductor manufacturers, with the aim of securing a reliable supply.

Do you have any tenuous links in your supply chain that could stand to be similarly shored up? The breathing room afforded by slowing macroeconomic growth – expected to commence imminently and persist into the second half of 2023 – may offer an opportunity to explore such solutions.

The war in Ukraine brings new uncertainties and threats. The country had, until the Russian invasion, supplied a large portion of the world's neon; the gas is a critical ingredient for the lasers that etch on and bore through the silicon wafers that become semiconductor chips. According to Reuters , two companies in Ukraine – both shuttered since the onset of the invasion, at least temporarily – have supplied between 45% and 54% of the world's neon.

On the one hand, semiconductor producers were to some degree prepared for this disruption. They experienced something similar in 2014, when Russia annexed Crimea. Correctly surmising that the conflict was likely to reemerge in the future, they took steps to hold more neon in inventory or secure backup suppliers.

On the other hand, the disruption may be more difficult for the smaller semiconductor producers with fewer connections and less-robust purchasing power. Some of these smaller operations were looking specifically at the "legacy" semiconductor niche in auto manufacturing . Time will tell.

The bottom line: such events occur. Understanding the business cycle and the appropriate actions to take amid its four phases will leave your business less vulnerable when they do. If you would like to learn more about fortifying your business via practical and profitable decision-making, please contact us!