Real (i.e., inflation-adjusted) personal income – as earned for productive economic participation – is at a record high. This bodes well for the overall economy because it means the consumer has more to spend to drive the macroeconomy.

There is an asterisk here, though. The descriptor “as earned for productive economic participation” is a less technical version of “excluding transfer payments,” the more data-oriented phrase used by the Federal Reserve Bank of St. Louis, which compiles and provides the income data. Transfer payments do not involve productive economic participation – they are made to the receiver for nothing in return. Examples include tax credits and stimulus payments, such as those issued by the federal and state governments to cushion the financial impact of the COVID-19-related shutdowns and restrictions. 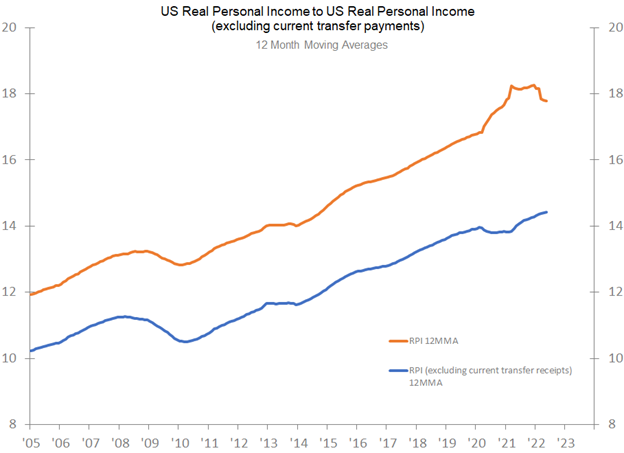 The two have moved in a demonstrably parallel fashion over the years, but there are a couple key exceptions. In 2020, at the onset of the COVID-19 shutdowns, the “excluding” line begins a dip. This occurred as some employers responded to the pandemic-related shutdowns and their consequent loss of revenue by putting workers on leave without pay or, in some cases, letting them go altogether. Put another way, production-oriented income declined because production itself declined as businesses halted operations per government orders.

Very soon after the onset of that dip, however, the “including transfers” line, rather than also turning downward, dramatically increases the steepness of its upward trajectory. This was the kick-in of government stimulus, and its unprecedented magnitude sufficed to spur an uptick in overall income even as production-oriented income declined.

Decline amid an upward trajectory

In 2022, the trends directionally diverge once again, essentially swapping trajectories. With the shutdowns lifted and businesses operating (and employing) as usual, the “excluding” trend has approximately returned to its upward pre-COVID trajectory. The “including” trend, meanwhile, has declined, rather sharply, with the withdrawal of stimulus. But if we look at it for the forest rather than the trees, we see that the trend has not descended so far as to buck an overall upward-sloping trajectory.

However, the trend’s shorter-term negativity, coupled with consumer inflation at multi-decade highs and a bear stock market, could go a long way to explaining the headline-monopolizing pessimism among consumers. There’s your irony. The government’s largesse at the outset of the pandemic helped consumers build their robust financial firewalls, but, because it couldn’t last forever, it has also likely contributed to their reported pessimism today. At any rate, we watch consumers’ actions, not their feelings.

Real income is just one measure of consumer strength we are tracking as the macroeconomy moves into the slowing growth phase of the business cycle and toward what we expect will be a soft landing with some flatness. Some other consumer indicators offer more straightforward signals – Credit Card Delinquency Rates and Non-Business Bankruptcies, for example, are both declining and trending very definitively below pre-Great Recession levels and well below pre-pandemic levels. This indicates that the irony noted above is thankfully not of the darker variety; consumers have not overextended themselves as of now.

We will be watching all the trends, consumer and otherwise, subtle and overt, and will disclose any consequential developments. The ITR Economics Trends Report™ is an excellent venue for staying with us as we assess the moving pieces and what they mean for the macroeconomy and individual markets moving forward.