Three Indications Economic Conditions May Be Worse Than You Thought

Disconcerting Profit and Cash Signals in the US and China

There is a reason you may be feeling that your company’s rising trend is losing momentum or stalling out. It could be that you are feeling what is going on for the economy at large. That means any remedy for the short term must come from within your company, not from external factors.

US Corporate Profits With Capital Consumption Adjustments passed through a business cycle high in September 2018, as measured by the three-month moving average (3MMA). The lack of rise in the 3MMA and the 3/12's (3.1%) downward passing of the 12/12 (7.0%) suggest that, at best, corporate profitability ascent will be constrained through the near term. 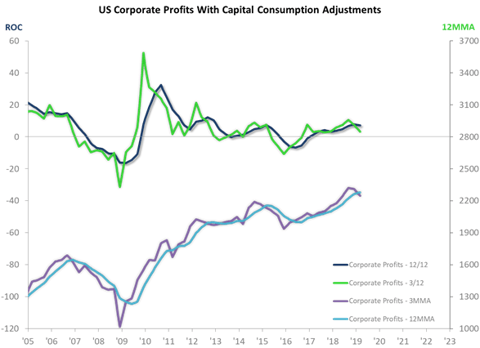 Couple that with the recent drop in US Corporate Cash Holdings to below the year-earlier level, and you have a recipe for slowing growth in spending. The Cash Holdings 3MMA peaked in March 2018; it stayed above year-earlier levels until the end of 2018. This does not necessarily mean we will see another leg to a stock market correction (the correlation is not that tight), but it is a pretty good signal that US Nondefense Capital Goods New Orders (excluding aircraft) will continue to move lower on the back side of this business cycle.

An unexpected and interesting data series popped up recently: China Industrial Profits. The chart below compares that profit series for China to something roughly analogous in the US, US Corporate Profits for Domestic Nonfinancial Industries With Capital Consumption Adjustments, using 3/12 rates-of-change. The chart shows that profits in the US and in China tend to experience the major moves in approximate synch. However, unlike in 2007 when China prospered while our profits fell, the reverse is happening. China’s profits fell below year-earlier levels beginning in November 2017 while US profits were ascending. China is clearly experiencing some pain right now because of the ongoing negativity in profits. While we don’t expect the US profit decline to be as severe, the history suggests that it could occur. Retaliation and profit margin squeeze(s) have yet to run their way through the US economy.

Our Leading Indicator System suggests that the normal business cycle will swing back toward the upside as we go through the first half of 2020. Profits would normally follow suit. Expect some relatively lean weeks/months between now and then unless your business lags the general economy.