ITR Experts Say: Economic Growth Is All About People

During a recent interview for a podcast, I made the casual comment that "economic growth is all about people."

The more people there are, the more products and services they consume, thereby driving economic expansion. Furthermore, the most promising future economic development will likely come from those parts of the world that show the most robust population growth in the coming decades.

The link between population and economic growth is a relatively basic concept that sometimes gets overlooked. In fact, the person interviewing me abruptly paused his line of questioning so that I could expand on what I meant by my statement. After I explained – in more detail – that consumption drives demand and people drive consumption, he told me he never really thought about economics that way.

With the notion in mind that people are the driving force behind growing economies, I felt compelled to analyze the current state of global economic affairs. Based on the latest data from the International Monetary Fund (IMF), the world economy (as measured by GDP) is largely dominated by Asia, North America, and Europe. The Asia & Pacific region comprised 33.5% of global GDP last year, with North America and Europe having relatively similar shares at 28.0% and 26.2%, respectively. Together, the three regions comprise 87.7% of the world economy. Africa & the Middle East, at 6.9% of global GDP, and South & Central America, at 5.4%, are therefore relatively modest in their economic impact on the world.

However, economic contributions by region diverge greatly from the global population breakdown by region. According to the World Bank, although the Asia & Pacific region has the largest share of people as well as of GDP, the shares are not proportional. In 2017, 55% of the world’s population called the Asia & Pacific region home. As it accounts for only one third of global economic activity, the region is clearly “punching below its weight" in that regard. The same can be said for both the Middle East & Africa and Latin America.

In contrast, the economic contributions of both Europe and North America are substantially larger than their respective shares of the global population, which stood at 11% and 6% in 2017. 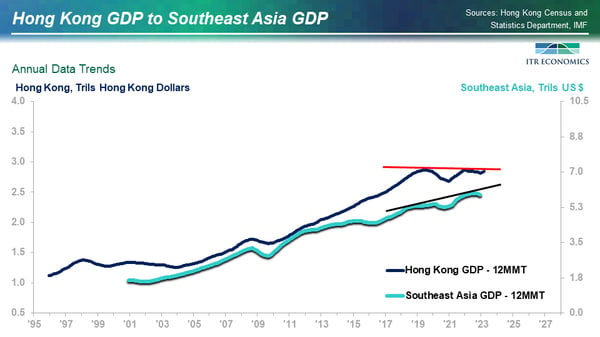 To understand where future economic activity will be concentrated, there is one other population factor that must be considered – population growth rates. Despite their currently high contributions from an economic point of view, North America and Europe (with Russia) had the lowest rates-of-change in their populations in recent years. The latest figures from the World Bank, which track the percent change in population between 2010 and 2017, show that North America’s population grew by 5.6% over that timeframe, while European growth was even more diminutive at 1.5%. If this trend continues, as is expected, it does not bode well for these regions' economic growth in the future. As a point of comparison, the population growth rate in both Asia & Pacific and in Latin America was 8% or more during the same timeframe. In an even greater disparity, the populations of Africa and the Middle East grew at double-digit rates during this time; however, those populations lack the level of law so necessary for sustained economic growth

This analysis illustrates the need for businesses to think and plan long-term in order to identify the best opportunities for their own future growth. Is the population count a major driver for your company? Perhaps per-capita income levels are more important? Perhaps it is wealth concentration?