4 Takeaways Regarding Our National Debt

A change to the trend in our national debt, which would reduce the probable severity of the Great Depression in the 2030s, is unlikely.

I limited the scope of our results to periods not marked by major wars because the Civil War, WWI, and WWII heavily skewed the results. We did not exclude regional conflicts/wars because our analysis showed that a) there was no tendency toward one party or the other in this regard and b) executive wars (unofficially declared by the commander in chief but not Congress) came under the heading of “policy,” just as peace does.

The table below shows essentially the same increase in national debt whether Republicans or Democrats occupied the Oval Office over the whole history applicable to Republicans and Democrats. Parenthetically: the numbers for both parties would shoot up considerably if these wars were not omitted, and the Republicans would come out much the worse for it because of the Civil War. 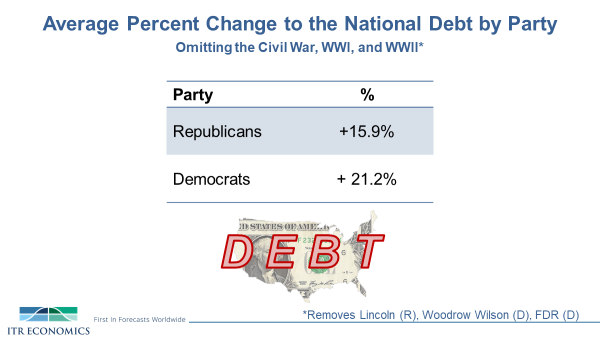 Regarding our forecast of a Great Depression in the 2030s, ITR Economics is politically agnostic. The above result supports our thinking that the future of this trend is not a function of political party but of policy, and the policy of deficit spending is not relegated to just one party.

I then broke down the numbers for just the post-WWII period in the event there is a “modern” bias to observe. The opportunities for effecting change to the national debt were evenly split, with seven opportunities for the Republicans and six for the Democrats. 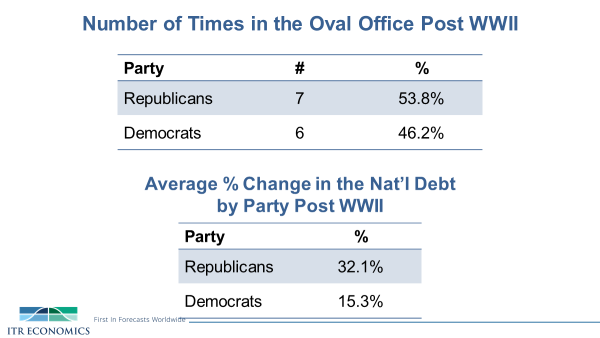 Restricting the analysis to the post-WWII period showed a greater contrast in performance relative to the national debt. The increase under Republican administrations comes in essentially with a 2:1 ratio to the Democrats. That added more emphasis to our position that it is policy that matters, not political party.

We contend that reversing the direction of the rising tide of national debt would be helpful in ameliorating the downside we foresee for the 2030s. Toward that end, we wanted to see if perhaps one party versus the other has a proclivity to deliver a favorable outcome in this regard. The data below encompasses the entire Republican-Democrat history, and it again shows no clear party agenda. Indeed, restricting the analysis to the post-WWII era shows only one time the debt came down under a Democrat (Truman -15.0%) and two times for the Republicans (Eisenhower -4.0%, Nixon -6.0%). 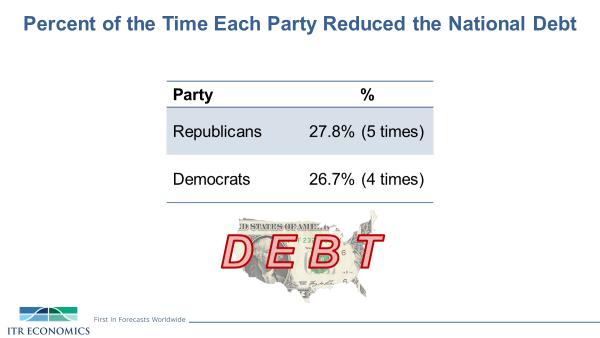 1. There is scant reason to think that either party is inherently superior to the other when it comes to reducing the national debt.

2. No administration has reduced the debt since Nixon.

4. It is unlikely that we will see a fortuitous trend reversal regarding the national debt before the 2030s are upon us.

Learn more about our outlook for the Great Depression ahead by joining us via webinar on July 22.

Topics: Insights from Our CEO