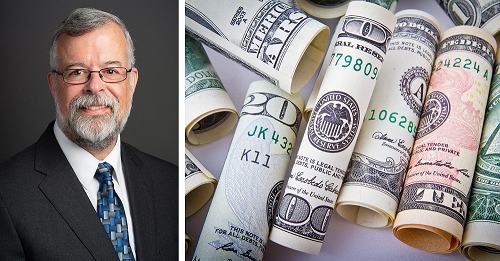 From the President's Desk: Dollar Woes

A lot has been written lately about the strength of the US dollar and the need to weaken it by means of a reduction in the federal funds target rate – the thought being that a weaker dollar would help US exports, help overseas firms with dollar-denominated debt, and by extension help the global economy.

If that’s what you are looking for, the good news is that the US dollar, as measured by the Trade Weighted Exchange Rate Index1 provided by the St. Louis Federal Reserve Board, is weakening slightly on a monthly and a 3MMA basis off tentative May 2019 highs. The tentative highs occurred before the Federal Reserve Board lowered the federal funds target rate in July. The decline in the monthly data since May is the mildest since 1976 (43 years), so it is not a boon to business, but at least the dollar is not strengthening at the moment. We don’t expect the dollar to give up ground in the near term, as a softer global economy will most likely drive investors to the dollar as a safe haven.

The Trade Weighted Exchange Rate increased 8.0% in value from the Feb 2018 low to the tentative peak in May 2019. Exports from the US could appear more expensive in foreign markets as a result of this increase. A product selling for $10,000 in a foreign market in February 2018 would theoretically cost the purchaser 8% more in local currency in May 2019. The US exporter could reduce the selling price by 8% at the expense of profit margin, assuming there is sufficient profit to allow for the price reduction, or risk the loss of a sale if the 8% increase makes the product no longer price-competitive. Either way, it is a tougher environment for exporters. The export of goods out of the US equals about 8% of GDP, so a slowdown here will ripple out to suppliers and related service providers.

An importer of foreign materials likes a stronger dollar, as it reduces the material costs by the 8%. A product that cost $10,000 in February 2018 would cost $9,200 in May 2019 if payment was made in the local currency. That cost savings would allow the importer to increase the operating margin on domestic sales and shave the price some on a finished export item. The cost savings on material would not offset the effect of a stronger dollar on the export transaction, but it could take some of the pain out of the margin squeeze.

The Federal Reserve Board may elect to lower interest rates in its December meeting or other future meetings. This does not guarantee a weaker dollar, as many seem to assume. The chart below shows that the relationship is far from linear; there are market forces at work that are stronger than an interest rate move by the Fed. Expect the dollar to remain relatively strong through the rest of the year as the global economic slowdown plays out. The dollar can be expected to weaken again when business and investor fears dissipate as the global economy picks up later in 2020.

It is more important for you to know how your company fits into prevailing economic trends, which leading indicators to watch, and how directly the dollar valuation impacts your business. We would be happy to help with that. There are many factors at work, and focusing on just the dollar could easily result in your being blindsided by foreseeable economic events.

1Averages of daily figures. A weighted average of the foreign exchange value of the US dollar against a subset of the broad index currencies that circulate widely outside the country of issue. Major currency index includes the Euro Area, Canada, Japan, United Kingdom, Switzerland, Australia, and Sweden.