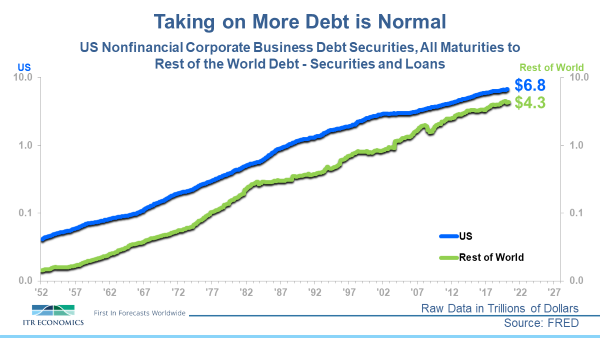 It is worth observing that the Rest of World trend line is closing the gap to the US trend. The trends are on log scales, so the closer rate is real. Especially at a time of very low interest rates, taking on debt to leverage the future could be considered a savvy move.

The next chart illustrates corporate profitability in the US. The data is in billions of nominal dollars (no adjustment for inflation) and comes from the Bureau of Economic Analysis (BEA). The profits trend reached a high in September 2014 but essentially flattened out beginning in 2012. There has been no growth in profits. 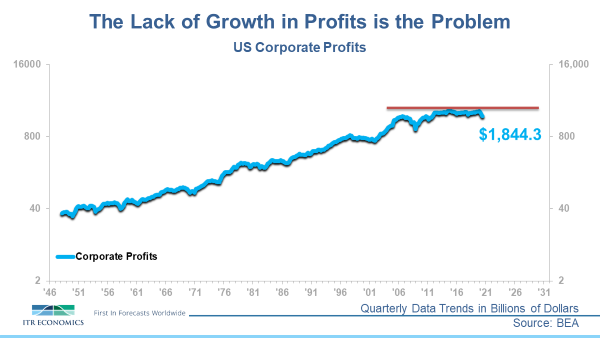 This suggests that the problem is not with the amount of debt that was taken on, but rather with our nonfinancial businesses' lack of making a profit. There will likely be a tendency to blame government because of taxes and/or regulations. There is likely an element of truth in that thinking; COVID interrupted the relatively recent shift into rise, so we won’t know how much traction the ascent would have achieved. We know from work with our clients and our businesses that one or two “off” years occur over time for various reasons, but the systemic failure to grow profits suggests to us that management possibly grew complacent or failed to properly execute plans that would drive profits higher. There is data that suggests stock buybacks, and/or unproductive mergers and acquisitions, and/or keeping profits offshore may have syphoned off our historical capitalist directive to increase profits and utilize those profits to make our businesses (and therefore the economy) more productive, more competitive, and more dominant for the future. Increasing profits are effectively a requirement for long-term economic health.

On November 17, ITR is hosting a webinar examining the economic impact of the election results. The table below shows that the US effective corporate tax rate of 27.0% in 2020 is at the high end of the range of rates among our major trading partners. If a new administration comes in, and if corporate taxes are pushed higher, and if the regulatory burden is increased, it seems to us that the probability of seeing US profits regain their lost momentum will potentially be lessened. Amongst other things, that would ultimately be a very dangerous trend for what is already an overvalued stock market. Stay tuned… 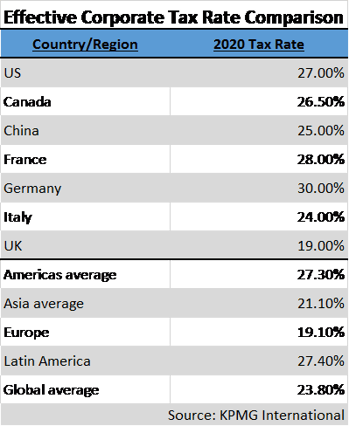