Size Doesn't Seem to Matter – Yet

The growing national debt is about to go much higher.

We know many people are concerned about the size of the federal debt and the rate at which it is growing. The chart below shows the national debt as a percentage of GDP. The data runs through the end of the last government fiscal year. It is safe to assume that the large step up that occurred as a result of the 2008-2009 Great Recession is a conservative precursor to what we are about see as the fiscal stimulus packages keep rolling out. The chart does not include state and local government debt. Adding that level of debt increases the debt-to-GDP ratio by between 9.3 and 19.0 percentage points over the last 10 years (the size varies from one year to the next). 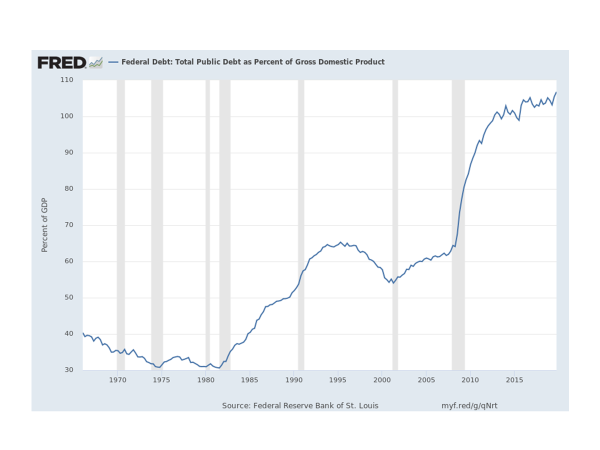 Keep in mind that the deficit reflects not only the government’s spending but also the decline in revenue caused by shutting down swathes of the economy. The numbers are about to get very ugly if you are concerned about the US deficit. Per data from Trading Economics, we are moving higher and higher in the ranks of heavily indebted countries, most of which would not typically be associated with economic might or be known as economic powers.

Government Debt to GDP (not adjusted for inflation)

There are people that will tell you that we can get away with carrying this much debt (or more) because we are the biggest economy, or we are the preferred world reserve currency, or we simply win the ugly dog contest.

There will be people that will point to the lack of inflation in the aftermath of all our deficit spending and claim it is therefore a harmless endeavor that should be pursued for the “greater good.” Expect the Modern Monetary Theory argument to rev up over the next several years.

Will this increase in the national debt and the less-than-rarified company we find ourselves in hasten the coming Great Depression?

There are many consequences to running such a large debt. You are correct if you assume “consequences” sounds negative. However, hastening our economic demise is not necessarily, or at least directly, one of them. We contend (as do other economists) that it is not the size of the deficit that matters. It is the presumption that the US is willing and able to pay off that debt. The “full faith and credit” of the US government comes into play. We will not have the means to roll over the debt if the citizens and the rest world are not willing to lend us the money/invest in our debt obligation. Bad things happen when the lack of faith/confidence sets in. It could be argued that the sheer size of the debt could bring that day of reckoning forward. But, look again at the list above. The debt burdens those countries carry have not brought them to a crisis mode per se, except in Greece most recently, when there was concern Greece could never pay their obligations.

Time is on our side. There is no clear and present danger when interest rates are this low and the US is still growing. Therein lies the ultimate irony: all this stimulus for immediate growth likely precludes future growth from occurring. That future remains circa 2030 as far we can tell.