Insights from Our CEO Finance

9.1% Is Not the Most Important Number

The June CPI result reflected a 9.1% year-over-year rate of inflation. The number immediately garnered a lot of attention and understandably so. It was the highest rate experienced in the US since Nov 1981.

Most of the drive to reach 9.1% was from energy costs. The inflation rate for the energy component of the CPI came in at 41.6% for June. The CPI, excluding energy, was flat at 6.6% (it has been flat since February 2022). The energy component begins in 1980 and we have never had an energy inflation number that high. No wonder people are very attentive. We collectively lack the experience to understand what is going on in that sector and that frightens people. However, in our opinion, people who think the inflation rate will put the economy into a recession are wrong. It isn’t inflation that could push us into a recession, it is the Federal Reserve. But then again, they may not.

The chart below compares the CPI and the latest 9.1% indicated inflation rate to the Personal Consumption (PCE) Price Index (excluding food and energy). The latter is the measure of inflation preferred by the Fed. The formulation of the PCE is different from the CPI which the Fed apparently finds more suitable. The exclusion of food and energy is a phenomenon begun in the late 1970s (an earlier time of high inflation). The logic for excluding food and energy currently is that the Fed is powerless to mitigate either of these sources of inflation because the Fed is not in charge of the war in Ukraine. Of course, the Fed professes to care about the pain caused by higher energy and food prices, but they seem logically focused on effecting change where they can. 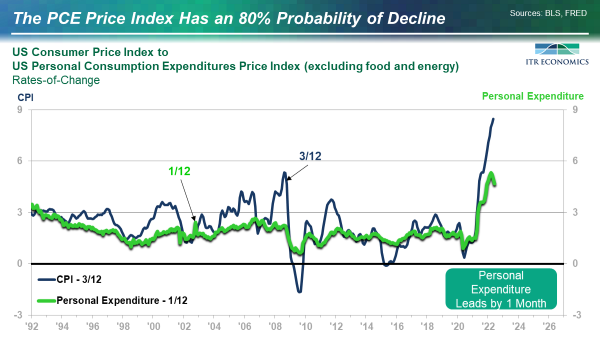 Note the PCE Price Index is declining. We have a tentative March 2022 peak in the rate of inflation. The current PCE Price Index inflation reading is 4.7 vs. the March reading of 5.2%. There is an 80% probability that the March level will hold as the high for this cycle. That is good news. It means that the Fed could slow down its rate hikes if it wanted to because the inflation tide is flowing out. Unfortunately, as we will demonstrate at our July 21 webinar on inflation and interest rates, the Fed tends to overshoot the time it should stop.

One of the most effective ways of seeing if the Fed has gone too far with rate hikes in this cycle is to monitor the yield curve. Look at the chart below. The 3-Month Treasury Bond Yield moves in step with the Fed Funds Rate. Should the Fed persist with its rate hikes, and the 30-year Long-Term Bond Yield not rise, the Fed could push us into an inverse yield curve situation. An inverse yield curve is a traditional harbinger of recession if sustained for a minimum of two months. There is hope.