Insights from Our CEO Budget Planning

Five Aspects of Inflation to Consider

Expect the trend to shift:

Inflation in the US reached 7.5% in January according to the Consumer Price Index (CPI). That is the highest inflation rate since February 1982. For many millennials, that was literally a lifetime ago; for boomers it is well within the span of “we were there and lived through it.” Gen X likely studied the period in their business courses.

Having lived through a period with this type of inflation provides a somewhat unique perspective. It was not the end of the economy, or profitability, or consumption. However, it distorted behavior and left people open to making some questionable decisions. As you ponder the headlines regarding a 7.5% inflation rate, keep in mind that we are heading into a period of disinflation as the economy moves through the slowing growth phase (Phase C) of the current business cycle. The current uncomfortably high rate of inflation will diminish as we go through the bulk of 2022 and likely the first half of 2023.

An easy way to connect the economic dots is to turn to our favorite precious metal, copper, to see what it is telling us about the overall CPI trend. The chart below compares the CPI 3/12 rate-of-change (latest three months averaged and compared to the same three-month period from one year earlier) to the price of copper, also using a 3/12. We are utilizing the 3/12 instead of the 1/12 (monthly data relative to the same month one year earlier) simply to diminish the trend’s volatility. 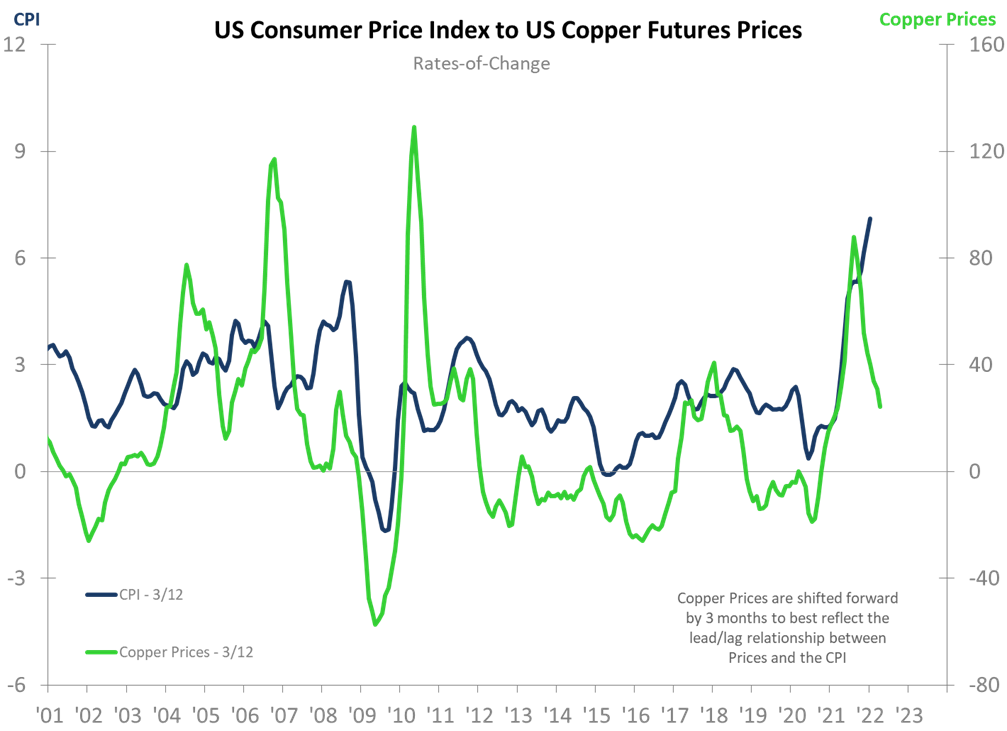 Vendors will be pushing through price increases in 2022 wherever possible. It is likely that your best opportunity to push through price increases to your customers will be sooner in 2022 rather than later. As supply chains tend to normalize and the headline CPI comes down, it will become psychologically harder to be aggressive with prices. Strike while the iron is hot.

It is normal to look at a price trend and have the mind and eye linearly extrapolate that trend. That can lead to poorly timed decisions or a willingness to accept too high a price. It is one of the reasons why we utilize rates-of-change – to break the tendency toward linear extrapolation. Example: Yes, home prices are going to continue to generally rise, but not at the pace we have seen over the last year. That takes some of the urgency out of needing to buy that house today for fear of what the price will be tomorrow.

It is common to feel that the inflation the individual is experiencing is not reflected in the CPI. That is for two reasons:

Rather than relating to a specific number, our relationship to the CPI should be one of gauging how “hot the water is,” how likely interest rates are to rise, and what decisions need to be examined through a different prism.

Inflation is a scourge that lowers the standard of living for a lot of people and distorts business conditions. Rising interest rates result from rising inflation largely because of the risk of a lower-valued currency in the future. Rarely is an economic trend “bad” or “good.” Any trend typically has elements that make it unfavorable for one group of people and favorable for another. In the case of inflation, the trend is favorable for a government that is racking up impressive debt. Inflation means being able to pay off that debt with cheaper dollars (in the case of the US). That would be a valid argument for inflation having a positive side for the government if the government wasn’t going to have to refinance the increasing level of debt at higher and higher interest rates. The government’s situation is not analogous to a homeowner finding it easier to make his mortgage payments years into the future. The mortgage is static. The national debt is rolling.

The near-term aspects of inflation addressed above are the beginning to a systemic issue that directly ties into our projections for a depression in the 2030s. Inflation of 7.5% is high. There will likely be times between now and the end of this decade where inflation is higher. Utilize the respite from high inflation in 2022–2023 to formulate your long-term strategy for contending with a relentless economic force, the likes of which we haven’t seen in two generations.