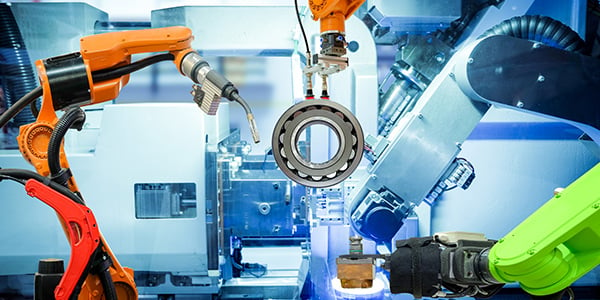 The global industrial economy is clearly on the back side of the business cycle. In many regions of the world, such as Europe and Asia, the slowdown was underway by early 2018. In the US, it was delayed until the second half of last year due to the positive impact of tax reform. However, in 2019, we’ve seen deceleration across the board, with some countries’ industrial output falling below year-ago levels in recent months.

The performance of the worldwide industrial machinery market, valued in the hundreds of billions of dollars annually, has reflected a similar trajectory.

Production of machinery in the Americas region, which according to our partners at Interact Analysis comprises approximately 14% of the global machinery market, remains above the year-ago level. In the US, machinery production was still up year over year as of August, but the monthly and quarterly data, as well as machinery new orders, point to further downside pressure. Similar observations can be made for both Canada and Mexico.

In Europe, which accounts for about 27% of the global machinery market, annual production rates-of-change were negative as of August, and the decline is likely to turn into deeper contraction as we head into 2020. Production of machinery in industrial stalwarts like Germany, Italy, France, and the UK is down on a year-over-year basis. Market conditions will likely weaken further before we see any improvement.

Even in China, which accounts for nearly 60% of the worldwide machinery marketplace, things have slowed dramatically, and pockets of negativity have emerged. Chinese production of machinery gears, for example, has been in year-over-year contraction territory since late 2017.

In our November webinar we will conduct a deep dive into various machinery markets around the world, provide an overview of current market conditions for different types of equipment, highlight the variances in the machinery markets between major geographic regions, and provide some guidance for what you can expect in 2020.

We hope you join us!

Attend our webinar on November 14 to learn more!