Beyond the 2030s, a Great Future Awaits the US Juggernaut

Alan and I hosted a webinar July 18 about the economic risks and opportunities ITR Economics sees for the 2020s and also for the 2030s (the latter being distinctly different and more dire than the former). We used one slide that pertained to the period following the Great Depression that we see occurring in the 2030s. The data presented for that purpose is shown below, and it is incredibly important.

What it means is that, unless we betray our capitalist roots and swerve toward a more socialist economy (a real threat), the United States will have a very young population base relative to other major economies. Only India will be substantially younger. “Younger” is defined here as less than 65, but they will also be younger across most age levels as a percentage of the total population.

Combining an entrepreneurial culture, capitalism, and a younger economy will create an economic juggernaut that China and the others will not be able to catch for at least one to two generations.

The question arises from the chart: Will India finally make a move toward becoming a more significant economic player on the world stage? A current perspective is useful here. India accounts for 3.2% of the world’s economy using 2018 data despite having 17.8% of the global population. The US figures are 23.9% of 2018 world GDP and 4.3% of 2018 world population. As I frequently note during my Economic Outlook presentations to companies and trade associations, India is lacking in a crucial economic growth factor relative to the US: the rule of law. Personal property rights, intellectual property rights, and functioning bankruptcy laws are crucial to sustaining economic growth over the long haul. India has a mass of people, and they are young. The country has natural resources of its own. But it lacks that necessary third key factor of law. 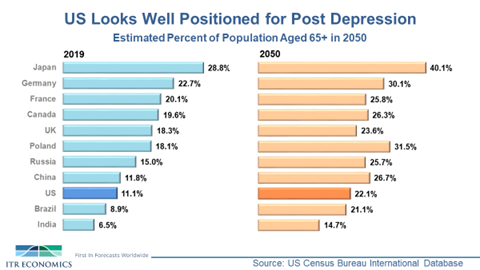 This matters because it looks to us that the US will continue to be the world’s biggest, brightest engine for economic growth for generations to come. At least we alone have that potential among the major economies. We also have the potential to mess that up. The fate of our children’s children is in our hands as we march through the next 10–20 years.