Hong Kong has dominated global headlines during the past few months as a controversial extradition bill ignited protests and social unrest within the city, but at ITR we have been watching for different reasons. As we often remind people, ITR is apolitical, and the protests, a geopolitical matter, are best examined elsewhere. From our perspective, the more attention-grabbing Hong Kong trend is the tumbling total freight volumes we have observed moving through the city during the last several months.

Despite its small size, geographically and demographically, Hong Kong looms large in terms of global financial relevance. In fact, as an air freight hub, Hong Kong International Airport towers above all others as the largest in the world (Memphis International Airport ranks second in the world). For this reason, Hong Kong stands as a bellwether of sorts for both economic activity in Southeast Asia and global trade overall. Unfortunately, the recent signaling portends ongoing downside pressure on the global economy.

Through the most recent data available, annual Hong Kong Air Freight Volume totaled 4.82 million metric tons, down 4.2% from the same period a year ago. During the most recent three months, the contraction has been more severe, falling 8.1% from the same period in the summer of 2018. It is worth noting that the deterioration in Hong Kong Air Freight Volume started to emerge as early as late 2018, so to dismiss and attribute the decline to the more recent protests would be unwise. This declining 3/12 rate-of-change leads World Industrial Production through the business cycle by eight months, and the chart below depicts a downward trajectory for global economic growth in the short term: 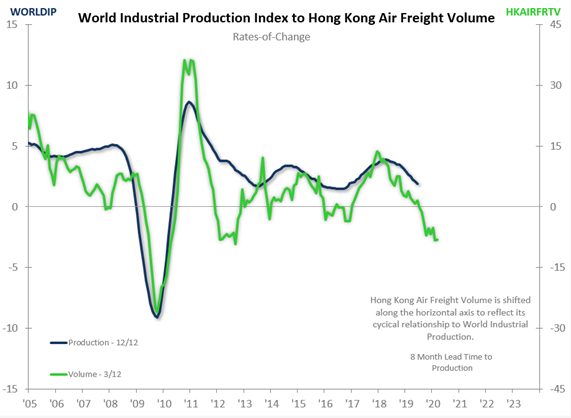 As you can see, Hong Kong Air Freight Volumes have served reasonably well as a leading signal for the ebbs and flows of global economic growth for the last 20 years. The current data suggests a worsening slowdown at the global level into at least early next year. For those businesses influenced by the undulations of the global business cycle, be sure to consider this trend line (and follow it in the future) as you prepare your 2020 budget and operational plan so your expectations are properly set.