What the Political Alignment Means for the Economy

The current political party alignment does not mean you should assume slow growth is ahead.

The chart below examines the historical growth rate of GDP, adjusted for inflation, from 1953 through 2019 and under four political alignments. The results may not be what you’d expect. Definition of “aligned” is a Democrat in the Oval Office and Democrats in control of the House and the Senate (albeit by thin margins at present). No attempt is made to rationalize the results in the table. We are simply showing that it is reasonable to assume that the economy will grow moving forward. If it doesn’t, it won’t be because of the political parties in control; it will be because of the policies adopted and positions taken. This is consistent with what we have said throughout the election cycles. The results exclude 2020 because COVID made the data “unique” in the context of the examined history. 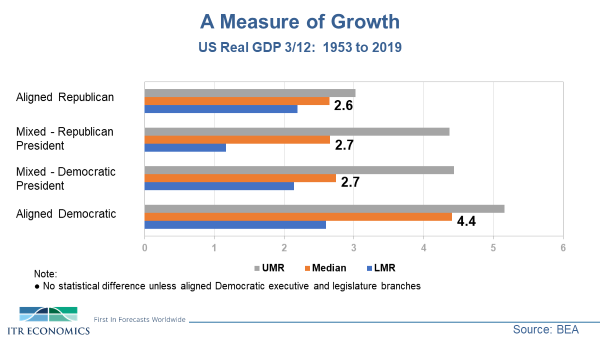 GDP is rising. Retail Sales are rising. Nondefense Capital Goods New Orders (excluding aircraft) are ascending. However, that does not mean all markets are. One of the basic concepts of economic cycles – that there are leading, coincident, and lagging parts of the economy – remains in effect. Some markets, such as a big swath of nonresidential construction and currently multi-family housing, are going to struggle in 2021, and some into 2022. Use the reality of ascent in the earlier-turning parts of the economy to derive solace that these latter-turning markets will be moving upward – just later. We time the lead–lag relationships between these different parts of the economy, and at this point in the cycle, timing is everything. Understanding the timing reduces uncertainty and therefore consternation.

Bearish prognostications seem to be multiplying in force as the stock market continues to generally rise. Expect to climb the proverbial “wall of worry” in 2021 based on monetary policy. However, that doesn’t mean you won’t see some market rotation occur over the year. No one can time the market; however, the “canaries in the mine” that we employ are currently still chirping without any shortness of breath. We think you don’t want to be left out of this market ascent, but be sure to avoid holding on to certain sectors for too long. Your financial planner can help in that regard, as can the ITR Equity Optimizer model.