Where Is the Workforce?

Individually, we need to up our game in terms of retaining the talent we have and attracting new talent better than our competition.

The declining trend is not a straight line. The overall decline is actually broken up by periods of improvement that occur before the next round of decline gets us to even lower lows. Finding talent has been an issue for 20 years. Remember the full-employment era prior to COVID? The difference today is that the situation is more acute. The longer-term trend and the present acuteness of the trend are of concern to anyone looking to hire. There are also very real policy implications for the trend.

We set out to determine why the trend is negative. Certainly, health concerns pertaining to COVID have exacerbated the situation, but COVID did not create the trend. The chart shows the relationship between labor participation and the number of people enrolled in public and private colleges/universities. The most recent period of rise in labor participation occurs coincident with the decline/leveling off of the number of students seeking advanced degrees. The implication is that people were opting for higher education and opting not to work while getting those degrees. It seems the days of “working your way through college” are in the past for many people. 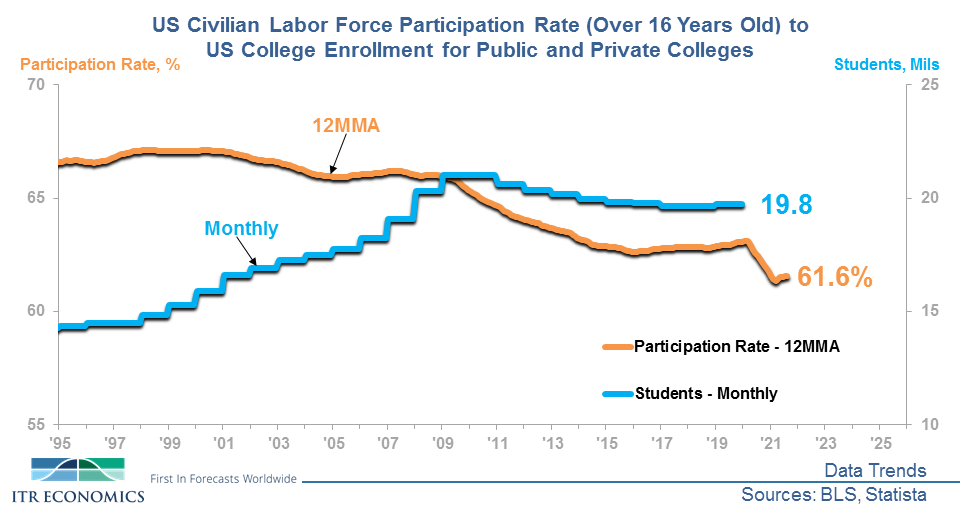 Supporting this supposition is the fact that the most significant drop in labor participation occurred in the population aged 16–24 years old.

Now, shift from looking at what has occurred to what is ahead.

One of the president’s objectives has been free community college for all, at least for the first two years. The goal is laudable in many respects, and therefore it is not hard to understand its appeal. But take another look at the above chart. There is a very real risk that the labor participation rate will drop lower as a consequence of more people going to college. An already tight labor market, which is extracting a premium from owners and managers in the form of wages and at times power, could get even tighter with labor becoming even more expensive. As a side note, the labor participation rate for people with a college degree is also in a long-term declining trend, but not as severe as that for the 16–24-year-olds. That suggests a different issue for another day.

Regarding those opting out of the workforce because of COVID, some will undoubtedly come back as schools open and the allure of higher pay sets in. Our concern is that the millions that have opted out of the workforce are going to decide they like it where they are. Doing so could weaken the country’s marginal propensity to consume and potentially slow the country’s rate of growth.