From the President's Desk

With a reputation as an accurate, straightforward economist, Alan Beaulieu has been delivering award-winning workshops and economic analysis seminars in countries across the world to thousands of business owners and executives for the last 30 years.

Copper is so ubiquitous in our everyday lives that it is almost invisible. The incredibly varied uses of copper make copper price hikes of great importance to both industry and consumers. A continuation of the rocket-like rise in copper prices screams “inflation!” and many people seem to be hearing and repeating that warning cry. We are not repeating that warning cry, because all rockets eventually come down or burn up. History, our outlook for US demand, and indications of a slowing rate of growth in China Industrial Production all signal that expectations for rampant ongoing rise in Copper Futures Prices are misplaced.

The chart below shows that Steel Scrap, Plastics, and Crude Oil, as well as other key commodities, track very closely with Copper Futures Prices. So, rather than discussing a range of commodities, we will focus on copper, while understanding that the same underlying thoughts apply to more than just copper. 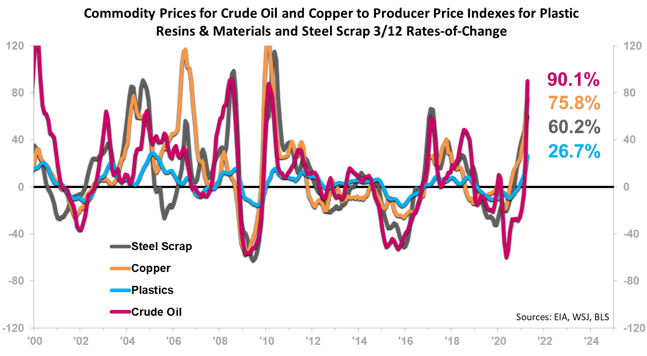 Demand is a key issue for commodity prices, and Nondefense Capital Goods New Orders is a good measure of industrial demand. What we saw in 2004, 2006, and 2010 is that when New Orders transitioned to a slower rate of rise – in other words, when New Orders formed a 3/12 peak – it resulted in a peak for the Copper Futures Prices 3/12. Today, the New Orders 3/12 is at its highest point in just under nine years. The 10.9% growth rate is unsustainable, especially as the strong pull from consumers begins to fade as the impact of the third stimulus package fades. The money from the infrastructure bill and other large spending bills would be spread out over years as opposed to paid directly to consumers. The impact on the economy would thus be spread out over time compared to the stimulus checks' impact, and any increase in demand would therefore be spread over years, not months. Look for a near-term Nondefense Capital Goods 1/12 high and then a 3/12 high to signal that the rise in Copper Futures Prices will slow rather quickly.

China is an incredibly important player in the demand for copper. The China Industrial Production Index 3/12 reached peaks in April 2004, April 2006, and December 2009. These peaks signaled slowing growth in China’s industrial base and thus in the demand for copper. The Copper Futures Prices 3/12 established highs in April 2004, July 2006, and February 2010. There are internal and external indications that the China Industrial Production 3/12 has tentatively peaked, which means the Copper Futures Prices 3/12 is also on the verge of establishing a high.

A 3/12 high in Copper Futures Prices does not mean prices will fall, but it does mean that prices would go to a more horizontal trajectory. Stocking up on inventory next quarter in order to escape higher prices in late 2021 and early 2022 will only result in increased levels of inventory at a time when the growth trend in demand is slowing. Project your likely demand curve using DataCast™ , and track commodity prices in our ITR Trends Report™. Knowing how you fit into the economy and into the price curve will increase the efficacy of your business plans for later this year and for 2022.