ITR Experts Say: The Timing of the Next Cyclical Low

By ITR Economics Representative on September, 13 2019

The US Industrial Production Index is ITR’s benchmark for the overall economy. Production is up 2.8% on a year-over-year basis (12/12 as of July 2019), and the data trend is rising. The US economy is expanding. However, the growth rate is down more than one percentage point from the October 2018 cyclical peak. Furthermore, the quarter-over-quarter growth rate stands at 1.0%, signaling further downside pressure on the annual growth rate during at least the next one to two quarters. 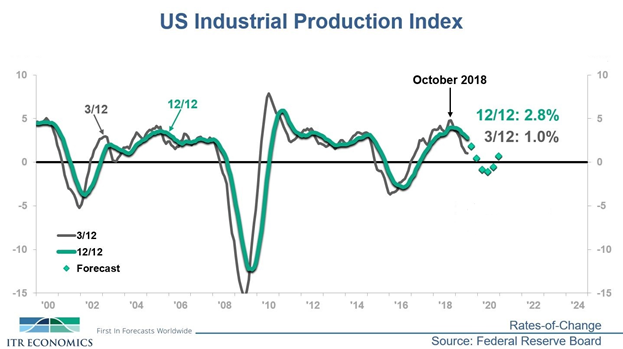 Lately, ITR economists have received a lot of questions regarding the timing of the upcoming cyclical low and the reasons behind our expectations for a rising trend in the economy in the second half of next year. The timing of the cyclical low is predicated on several factors, including: 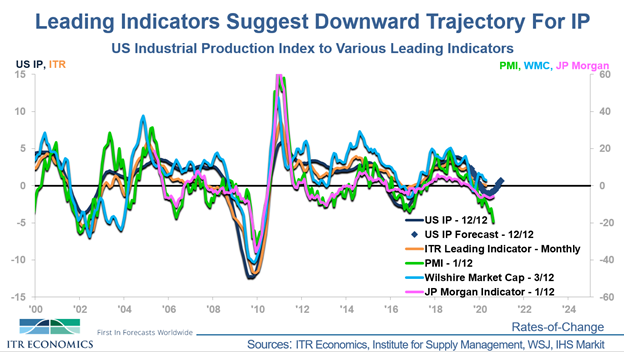 The palpable developments behind the next recovery trend are currently less clear. Tentative signals from our proprietary ITR Retail Sales Leading Indicator™ indicate that consumer activity could pick up in the second half of next year. Trade tensions between the US and its partners could ease. These factors, among others, could be possible catalysts for the next cyclical rising trend. As of now, there is not a list of evidence that explicitly points to a reason why the economy will strengthen.

It is important, however, to remember that growth is the economy's natural state. A growing population leads to more consumption activity, which leads to economic expansion. A development such as the winding down of the trade war would remove some uncertainty, an obstacle to natural growth.

There are some helpful signals to watch for that can aid in determining when the rising trend will take place. The first is the Industrial Production 3/12. Once it reaches its own cyclical low point and then upward passes the 12/12 (remaining above the 12/12 for at least three consecutive months), we can statistically expect the 12/12 to enter its own rising trend. It’s also important to pay attention to the input from the numerous leading indicators for Industrial Production in the coming months, which will help cut through the political and economic noise. When sustainable rising trends emerge in the leading indicators, it will firm up our expectations of the likely timing of the cyclical low and subsequent cyclical rise.

If you’d like to discuss the latest data developments for US Industrial Production or leading indicators with an ITR economist, please reach out to us — we’re here to help!