The Economic Recovery Outlook for Where You Live: Four Things to Know

The shape of the recovery in your business is first and foremost a function of the decisions that you make. Ultimately, it is not up to the federal government, state/municipal governments, or COVID-19. However, these three influences must be considered to varying degrees based on the nature of your business. We are going to take a look at some state influences. Perhaps they won’t impact your business directly, but they could have a bearing on your finances and the economic well-being of your community.

1. The GDP hit was not equally felt 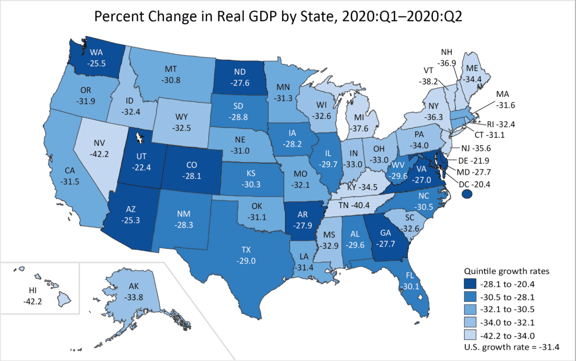 The lightest blue are the more severely impacted states, based on Bureau of Economic Analysis data. New Jersey is particularly notable as a state in trouble given the drop in GDP and a significant drain of its “rainy day” funds.

Medium- to light-blue-colored areas that are heavily dependent on tourism are not a healthy combination heading through 2023. The states best suited for a rebound are the darker-colored states that are more dependent on manufacturing.

The darkest-colored states (less severely impacted) are (from left to right) some of the better prospects for recovery:

2. Some states are better positioned to ride through the economic storm

A hit to revenues for the states could also impact credit ratings and impair longer-term prospects in addition to creating pressure on cutting services and raising taxes in the near term based on debt obligations and how well those obligations are funded.

What we are looking at via the list below are states that are the least heavily in debt as a percentage of GDP (in order from least indebted to more indebted):

3. It is good to have low debt levels, but having well-funded debt also matters.

The next list presents the five states with the most complete funding:

4. The map below is where it all happens. Demographics drive growth because more people equals more economic activity.

Adding up the lists, with a state having to appear on at least two of them, indicates the best prospects for a sooner-rather-than-later recovery from the COVID Recession are:

Knowing where the best economic prospects are from 2021–2023 considering COVID and finances and demographics means businesses can take action by allocating resources in geographic areas where it may do the most good. Perhaps you aren’t in a position to shift gears in these states, but you likely know which of your customers face the greatest upside exposure from these states. I’d marshal my resources in a manner that ensures I am giving my company the best possible means of maximizing revenue and profits. Pivoting to where the better business will be provides an important leg up on the amount of recovery you will harvest.

Topics: Insights from Our CEO